What an exciting show!

It’s hard to believe that the Basement show is over, particularly as the adrenalin is still running high from it! The show went so fast that there wasn’t enough time to publicly thank the many people who made the show a success. So I thought I would do this now.

Firstly, the musicians who performed on the night and gave the music all the exciting energy in the world: Steve Ley, Mervyn Sequeira, Rob Sullivan, Craig Walters, Sammila Sithole, Amy Cheung, Naomi Cray and Tarquin Halls Corbett. Apart from the incredible musicality and professionalism of these guys, they are wonderful people to work with and I consider it a privilege that these guys can bring my music to life.

Secondly I’d like to thank Heather Bulman and Klia Zuka who wrote the amazing lyrics to the vocal tunes performed on the night. Also to Chris Ruhle for his work in publicity, Georgina Reid and Peter March for their continued support along with Eastside Radio. Also to Chris Mycinsky who is responsible for the amazing sound you always hear when you go to the Basement, and also Andrew Masterton for having us at the Basement. Also Joey and Camilla Chan, Samuel Chan, and Sardi and Dom Rhodes who helped out on the night.

Finally, and most importantly, my wife Amy who has supported this project over many months as I have locked myself into the studio writing all the new material for the show and the marketing and additional administration she has done to help the band.

This show has been a team effort, and I’m deeply grateful for all those in the team.

Stay tuned for when I post video excerpts from the show! 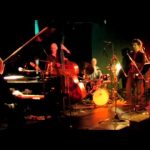